Veddahs, or "Wild Men" of Ceylon, one of the lowest types of the human race.
Article and engraving from "The Graphic" of June 14, 1884. 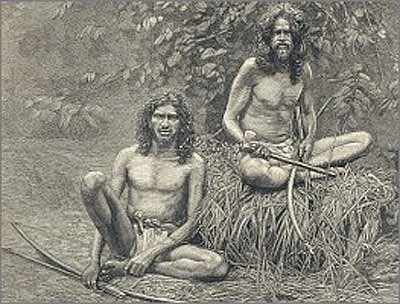 This strange and primitive race is generally considered to be the remnant of the aborigines of Ceylon, and its members are but a degree removed from wild beasts. They are divided into two classes, the Rock and Village Veddahs. The latter dwell in rude buts, and are a shade more civilised than the former, who, in caves or the jungle, maintain themselves as they best can, their greatest delicacy being a roast monkey. They are exceedingly harmless, and know nothing of history, religion (beyond a few relics of demon worship), or any art whatever, and are only skilled in archery. They are capital marksmen, and when they want to send an arrow to great distance draw the bow with the foot.

They cannot count, know of no amusement save dancing, and are popularly supposed not to laugh. During the Prince of Wales's visit, however, one of those brought before him managed to grin when presented with a threepenny piece. The Veddahs have, however, of late years shown some signs of becoming civilised under British influence, but comparatively few, to judge from the following note forwarded to us by Lieutenant A. W. Gordon, Royal Fusiliers, together with the photograph from which our illustration has been engraved: